0
That Interview with Capitol Communicator…
28 April 2019
Next

One of the changes that I’ve made recently to my creative kit is moving from full-frame to mirrorless. After weeks of researching and reviewing videos on different models from the A7 family to the various X-series offerings; I finally made the choice to go with the Olympus OMD-EM5 ii. One of the main reasons for my switch is that I lost my interest in photography & needed something that could reignite that passion. While I’m not a full-time photographer, I do use it as an extra source of income. So image quality and versatility were my main concerns, along with just an enjoyable experience.

The EM-5 has a retro SLR body which is very popular today and comes in three colour options. There’s an all black, black/silver & a limited edition titanium. Since this was a long term investment, I decided to splurge and get the titanium body (yes, that’s my justification so don’t judge me) with the m. zuiko 17mm 1.8 & 60mm 2.8 as a starter kit.

With the 17mm attached this is one sexy a** setup. It’s compact, efficient, and most importantly very light coming in at just under 1.5lbs. Despite it’s size and weight the body itself feels solid, it’s all metal and built like a f*#king tank. Coming from Canon this is a nice improvement where most of these models have a plastic feel.

The main problem with the body styling depends on your hand/finger size. If you have larger hands or longer fingers then the grip on this camera can become uncomfortable when using it for long periods of time. If this is an issue there are several grips and cases available, Olympus offers a battery grip, but my favorite is a third party half case from Gariz. It all comes down to personal taste and what your needs are. 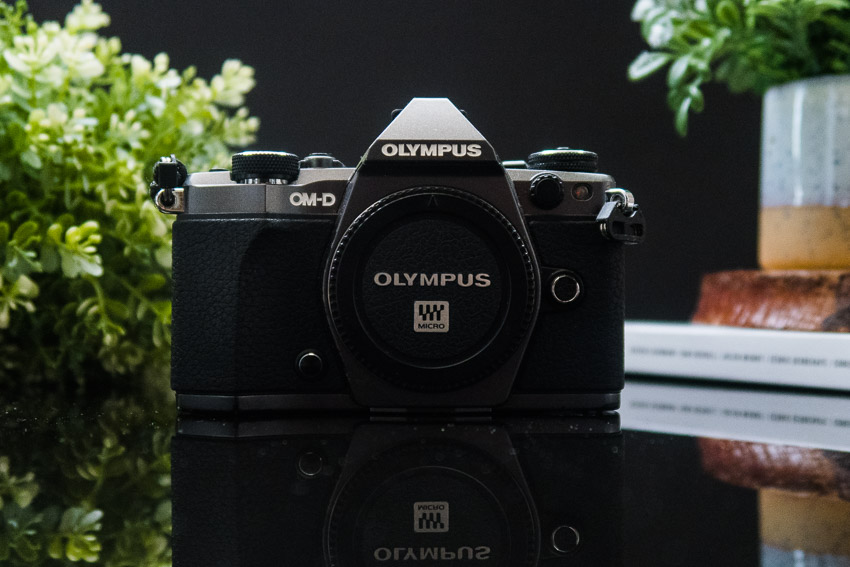 This is one area that this kit can run into issues depending on your needs. As a walk around camera, does great.

If your focus is product/still photography, f*#king fantastic. A niche feature that this model has, and one of the reasons I chose it over the x-series offerings is that it has a multi-shot mode. When activated it shifts the sensor multiple times turning a 16mp image into a 56mp raw. The jump in quality & clarity is drastic, turning a con of the micro 4/3 system into an asset that surpasses some full frame offerings. But…this only works in very specific conditions, mainly being… EVERYTHING in your image has to be static. If there are moving objects in your frame such as clouds, you will have a ghosting effect showing where each individual shot is blended together.

If you are in a controlled environment then this feature is wonderful for capturing extremely fine details. While an easy solution is to capture the high-res shot and simply composite out any errors, the case can be made to whether the extra details are worth the effort – Personal call -.

Night photography, not so much. The micro 4/3 system comes with pros/cons just like any other system. One of the main cons is the sensor. Because the sensor is less than half the size of a full frame, you lack the same dynamic range as larger sensors with more noise at higher iso. This isn’t as big a issue as it seems though. When I say high ISO, I mean high…like 3600 and above.

Another trait of the smaller sensor is that you lack the same depth of field of the larger sensor cameras. This can be both a pro and con depending on the topic you’re shooting.

This means that if you compare the 50mm 1.8 equivalent from a full-sized, APSC and MFT what you’ll notice is that as the sensor size decreases the bokeh becomes less pronounce. For someone like myself who primarily shoots lifestyle and street, getting a super shallow DOF is usually not my main priority.

*Side note – A important thing to note with MFT is that almost everything is doubled, after stopping down to f/4 almost everything is in focus because f/4 is actually closer to f/8 in full frame. But, while you have the sharp DOF of a f/8 you’re still gathering the same amount of light as you would at f/4. This lets you get away not having to crank up your ISO to compensate for changing you aperture. Confused? 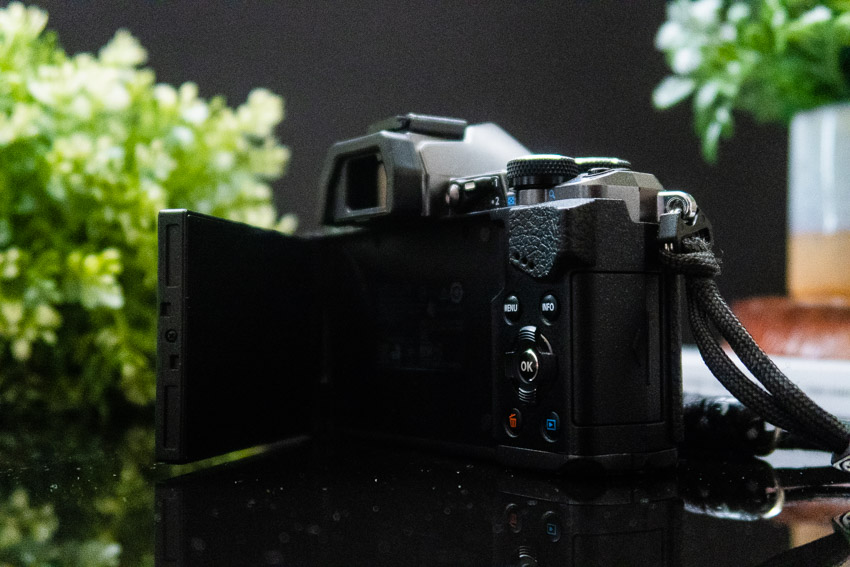 This camera has all the bells and whistles that you could ask for. Customizable dials, buttons, flip-out screen, an array of native lens and more. The main two dials allow you to fluidly change your shutter, aperture and ISO with just your thumb and index finger. They have a tactile grip and rarely change by accident.

In addition to three buttons on top (four if you don’t use video), there is also the DOF preview button to the side of the lens. Being that this is a mirrorless system with an EVF I remapped that to toggle between colour & monochrome, leaving the DOF on at all times through the menu settings. Despite it’s small size I’ve never found myself wanting more customizable buttons or that the buttons were placed differently. The layout of this camera really is quite fantastic.

Live Time is a feature that makes long exposure captures much easier and so much more enjoyable. With it you’re able to see in realtime (ish) what the sensor is picking up. Once you hit the shutter your LCD will continuously refresh showing you the build up of lights and colours. Once the image is at a point where you’re happy, simply hit the shutter to stop.

Having experimented with night time exposures as well as light painting in the past, this rekindled the passion for it. Rather than guessing and failing in the freezing snow, all you need to do is focus on the composition and watch the magic happen.

IBIS = Fan-f*#king-tastic. The 5-axis stabilization allows you to shoot at much slower shutter speed with almost no camera shake. For photos this means no tripod required, for videos almost gimbal like smoothness. (Please don’t use this camera for video.)

Silent mode = You’re not that person at the wedding/event constantly clacking away and ruining the videographers audio. My bad Matt. Another perk is that in silent mode you get to shoot at 10fps. This has some benefits other than the fun factor. More frames equals a better chance of capturing those in between moments of the action or blinking vs eyes open in group photos. However this can be quite unsettling in portrait sessions; models are use to the audio cue of the shutter signaling “ok, next photo, change pose/expression”. Once you remove that it becomes a very awkward situation if you aren’t communicating or using strobes. Moral of the story – don’t be the weirdo shooting in silent mode if you don’t need to.

Lastly these two features go hand-in-hand for me as I rarely use either. A nice thing the EM-5ii has is a flip-out screen with touchpad capabilities. Both on their own are quite nice to have; with the touchscreen  you simply tap the screen to set your focus point and take the shot. Pretty simple and lighting fast. Flip-out screens give you the ability to get more creative with your angles without breaking your neck or laying in lukewarm mud to get that perfect reflection.

Another neat trick is stealthy street photography, with the screen out just pretend like you’re checking settings or photos and snap away, this can be a great way to get over the fear of practicing street photography. 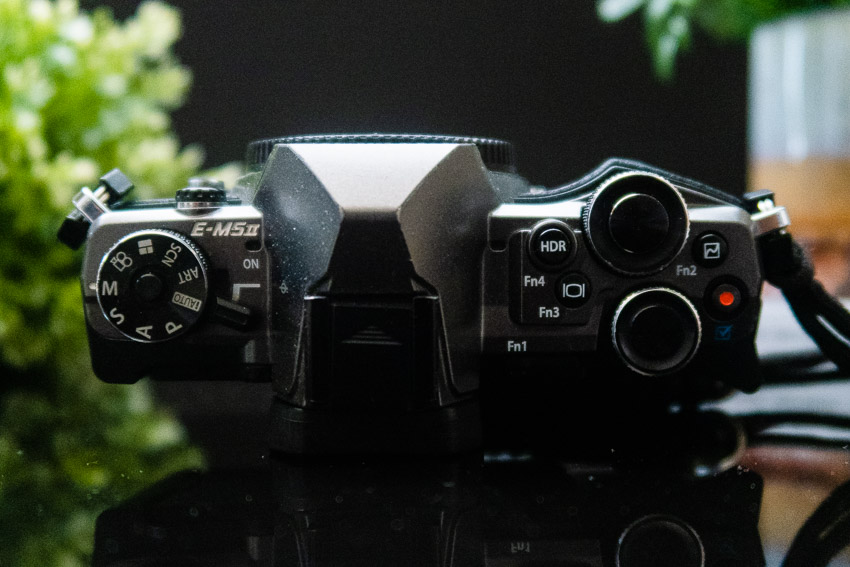 Menu: The menu system for this and almost all Olympus camera are designed in a special way. That “makes you want to hurl your shiny new camera through a window” way. This camera is designed to be fully customizable with multiple buttons, dials, levers and savable settings. Great, but in order to do so you need to scroll through 50 f*#king menus. The saving grace is that once you get everything setup you will rarely use the menu system again.

Startup: It’s slow. If you’re in a studio setting or one that doesn’t require quick response then it’s perfectly fine. However if you’re in a walk-around environment you can either leave it on and drain the battery, or run the risk of missing a shot. If you’re like me and never use the LCD then that is a good way to conserve battery life while walking around with the camera on.

Continuous Focus: It sorta works. Since this system only uses contrast detection it suffers from the same issue as other cameras with the same system. While your able to fire off 10fps, more than likely only half those shots will actually be in focus. 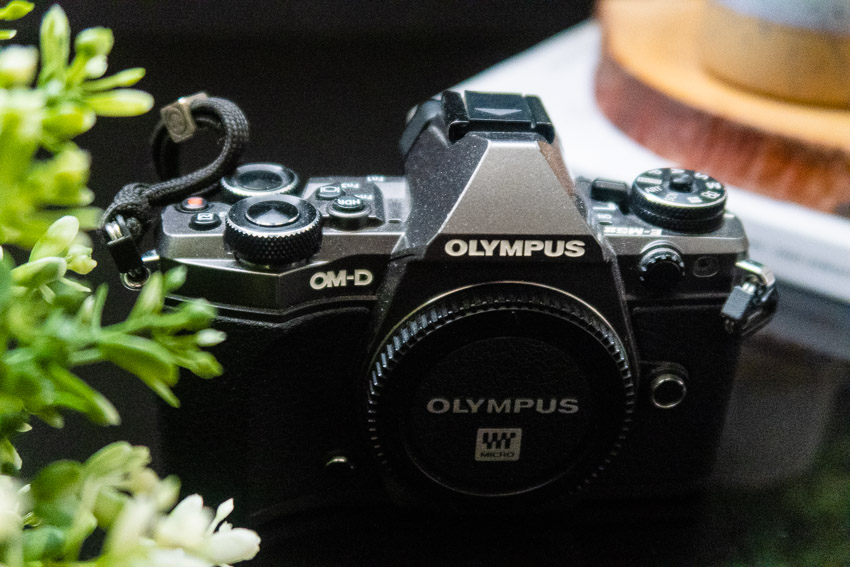 Whether you’re the average consumer, weekend warrior or a working professional the Olympus OMD-EM5 ii is able to fit your needs.